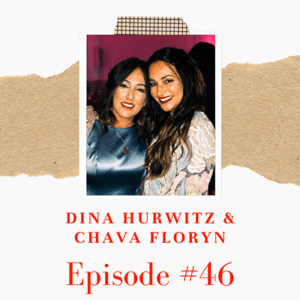 Chava Floryn is a writer, an award winning filmmaker, actress, a singer/ songwriter and advocate. With over 65 short films and 2 documentaries under her belt, Chava’s films have been featured across the globe in festivals such as The Jewish Film Festival, The Museum of Tolerance theater, The Ashkelon Film Festival, Hollywood Reel Film Festival and the Film Festival Mediterranean.

As a performer, Chava has traveled across the US with “The Search,”  a one woman show that included her original music and films from a series she created for Nationlight Productions where she attempted to answer the question, “What is the meaning of life?” As a writer, Chava’s articles and op-ed’s have been featured in The Jewish Journal, The Algemeiner Journal and The Huffington Post. She’s been featured on shows like “The Dr. Phil Show”, as well as on a Talk show pilot created by Harvey Levin of TMZ. Together with her husband of 25 years, they lead the young professional congregation for Beth Jacob synagogue in Beverly Hills.

Dina Hurwitz is the Chabad Rebbetzin to Rabbi Yitzi, an inspirational writer and spiritual guide who was diagnosed with ALS in 2013. Dina is a motivational speaker and a world renowned personality who continually writes on the subject of harnessing strength and spirit in the face of coping with challenge.

In this  episode, we talk about working though grief in order to get to the other side. Chava and Dina both stress the importance of acknowledging pain and suffering in order to heal. By ignoring difficult emotions we are essentially  prolonging our suffering. Only once we give ourselves the grace and compassion to sit with our grief and fully experience it are we able to move on.  Mourning in  of itself is not the goal rather, mourning as a path to healing and personal growth is the ultimate objective. 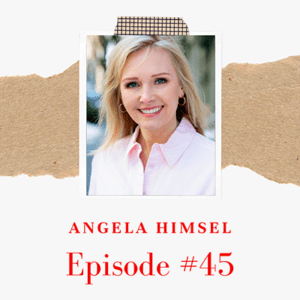 Angela Himsel’s writing has appeared in TheNew York Times, The Jewish Week, Forward, Lilith and elsewhere. Her column Angetevka” on Zeek.net American won two American Jewish Press Association Awards. Angela holds a BA from Indiana University, which included two years at The Hebrew University in Jerusalem, and an MFA from The City College of New York.

She grew up the seventh of eleven children in rural southern Indiana in a fundamentalist, doomsday, Christian faith. She converted to Judaism and lives in New York City. A River Could Be a Tree traces that journey.

In this episode, we talk about Angela’s memoir: A River Could Be A Tree. Angela shares her experience growing up in an evangelical branch of Christianity – the Worldwide Church of God.

Strict adherence to the church’s tenets, which forbade make-up, medicine, and other demonic  influences, was the only way for her to receive the Holy Spirit and live forever in God’s Kingdom.

In search of salvation, Angela decided at nineteen to study at The Hebrew University in Jerusalem. But instead of strengthening her faith, she was introduced to a thrilling new world. And she began to think that maybe everything she had been taught was wrong. Ultimately, the connection to God she relentlessly pursued was found in the most unexpected place: a mikvah on Manhattan’s Upper West Side. This devout Christian girl found her own form of salvation—as a practicing Jewish woman.

Book: the Bible, anything by Jane Austen

You can find Angela here .

To order or find out more about A River Could Be A Tree check out www.angelahimsel.com 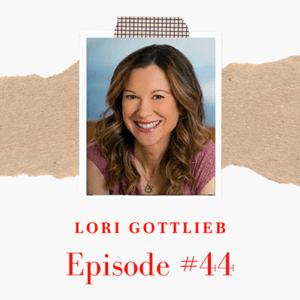 Lori Gottlieb is a psychotherapist and author of the New York Times bestseller Maybe You Should Talk to Someone, which is being adapted as a television series. In addition to her clinical practice, she writes The Atlantic’s weekly “Dear Therapist” advice column and contributes regularly to The New York Times and many other publications. Her recent TED Talk is one of the top 10 most watched of the year. A ​member of the Advisory Council for Bring Change to Mind and advisor to the Aspen Institute, she is a sought-after expert in media such as The Today Show, Good Morning America, The CBS This Morning, CNN, and NPR’s “Fresh Air.” Her new iHeart Radio podcast, “Dear Therapists,” produced by Katie Couric, will premier this year. Learn more at LoriGottlieb.com or by following her on Twitter @LoriGottlieb1.

In this episode, we talk about Lori’s work and her best selling book: Maybe You Should Talk To Someone. Lori talks about the importance of making choices that are true to ourselves and that help us lead a more meaningful life. Lori writes about our 100% mortality rate and how keeping that in mind can help us see our lives in a different light. We can examine our priorities and the way we spend our time thus allowing us to make more considerate and authentic choices. 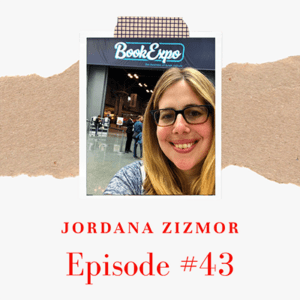 Jordana grew up in New York City and worked in city’s government Community Affairs and also in tech startups.She founded a hospitality-focused social media business and also co-founded Zero G Kitchen, which operates the first commercial kitchen on the International Space Station. Jordana loves to read and share what she is reading on her instagram @whatsjordanareading  She actually reads the books!

In this episode, Jordana shares her book recommendations for summer. We talk about our joint love for historical fiction and non fiction (Jordana has some great recommendations in  both those categories).  Additionally, we chat about the Zero G Kitchen which is the first commercial kitchen on the International Space Station. Jordana describes what the experience  has been like and shares what yummy food she  would like to offer on their menu!

House of Glass by Hadley Freeman

Lady in Waiting by Anne Glenconner

The Book of Eels by Patrik Svensson

The End of October by Lawrence Wright

This Is Big by Marissa Meltzer

To learn more about the Zero G oven check out this article. 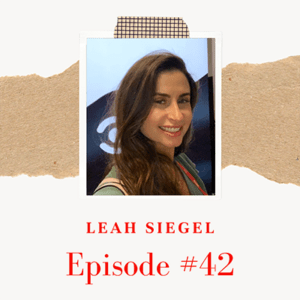 Leah Siegel is an accomplished professional in the financial industry. She has educated countless families helping them realize their goals and begin dreaming again. She is a highly sought-after speaker and is a mentor to many around the country. She has built a business around helping people reinvent their lives. Leah lives in Valencia, CA with her husband, Rabbi Jay Siegel. She is a mother of 5, and recently became a grandmother.

You can find Leah @leahsiegel7

In this episode, we talk all about money and our beliefs and behaviors around it. Leah’s goal is to empower women  through money and to encourage them to take control of their finances.  We discuss the six steps to financial freedom: 1- budgeting 2- managing debt 3-creating an emergency fund 4- purchasing  protection 5- asset accumulation 6- estate preservation and we explore each step in depth. Leah also dives into some of the most common money fears and mistakes that women make.

Book: 177 Mental Toughness Secrets of the World Class: The Thought Processes, Habits and Philosophies of the Great Ones by Steve Siebold

Quote: ” She silently stepped out of the race that she never wanted to be in, found her own lane and proceeded to win.”

A great podcast to check out here

A great book to read here 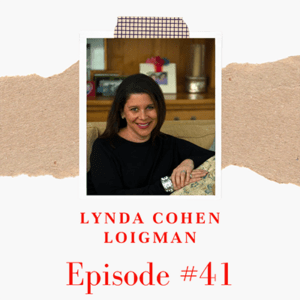 Lynda Cohen Loigman grew up in Longmeadow, MA. She received a B.A. in English and American Literature from Harvard College and a J.D. from Columbia Law School. Her debut novel, The Two-Family House, was a USA Today bestseller and a nominee for the Goodreads 2016 Choice Awards in Historical Fiction. Her second novel, The Wartime Sisters, was selected as a Woman’s World Book Club pick and a Best Book of 2019 by Real Simple Magazine. She is currently at work on her third novel.

You can find Lynda at www.lyndacohenloigman.com

In this episode, we talk about Lynda’s two books: The Two Story House and The Wartime Sisters. Lynda talks about her creative writing process which involves alternating the narrative between characters thus showcasing the character’s unique way of speaking and thinking.

As a child, Lynda was fascinated by the stories that her mother and aunts shared about living in Brooklyn. After practicing law for ten years, Lynda decided to follow her passion ate write. Using the stories she heard as a child, Lynda  writes about women, in particular sisters and sister in laws and the complex dynamic that often exists in those relationships.

Book: Saints for All Occasions by J. Courtney Sullivan

Quote: “No one can make you feel inferior without your consent.”- Eleanor Roosevelt

You can purchase Lynda’s book here.

You can find out more about Emily Schuman’s initiative here.