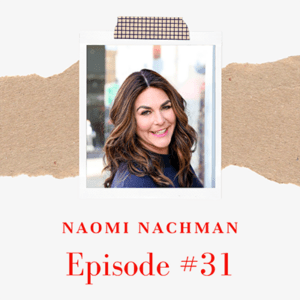 As cooking has always been her passion, in 2004, Naomi started her own kosher personal chef business, The Aussie Gourmet, to pursue cater weekly and Shabbat/Yom Tov meals for families and individuals within The Five Towns and neighboring communities and beyond — including Alaska and Israel. Naomi is often sought after to give cooking demonstrations and produce kosher Chopped competitions throughout the New York/New Jersey Metropolitan as well as across the country, where she shares her immense enthusiasm for food.

Naomi has her own cooking show on Kosher.com called Sunny Side Up. Naomi also hosts her own weekly show, “Table for Two with Naomi Nachman” on The Nachum Segal Network – which covers all food-related topics.  Naomi has also been a guest host on the QVC TV network and has been featured in cookbooks, a cooking CD and a variety of newspaper articles covering topics related to cuisine preparation and personal chefs.

In 2017 Naomi published her debut cook Perfect For Pesach with Artscroll.

Naomi currently lives with her husband and children in Woodmere, NY.

What you will hear in this episode:

– Naomi talks about her early start in the food world. Growing up in Australia where her parents had a catering business, Naomi was exposed to delicious and  fresh ingredients. When she visited Israel for the first time, Naomi was amazed at the abundance and availability of great kosher food.

– One piece of advice that Naomi offers listenners is the importance of networking to grow one’s business. We can take advantage of the built in support system that our communities offer to engage and network with others.

-Naomi discussed the process of writing her cookbooks. Her goal  was to provide easy to follow recipes in a variety of categories and to expose the reader to new flavors and ingredients. Naomi credits her extensive traveling in inspiring her culinary creations.

Book: All For The Boss by Ruchama Shein

You can find  out more about Naomi at @naominachman

This episode is brought to you by Chic Boards LA .